(Editor’s Note: The following letter was sent on October 31, 2018 to the Department of the Navy in response to their call for public feedback on the effects of expanded flight operations at Naval Air Station Whidbey Island’s OLF to local historic structures.) 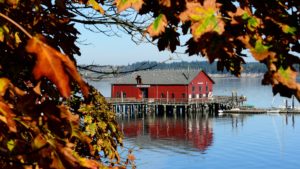 To the Department of the Navy,

The Port of Coupeville is a Washington State municipal corporation governed by an elected commission, responsible to their district electorate for economic development and management of its facilities. The Port District extends from north of Coupeville, to Greenbank, an area which includes Ebey’s Landing National Historical Reserve and the Navy Outlying Field.

The Port of Coupeville is concerned that significant expansion of EA-18G Growler operations at OLF will have negative impacts to the district, including diminishment of tourism, devaluation of local real estate (which impacts tax revenues for municipalities), and risks to residents from jet noise and fuel emissions. The Port now appreciates the opportunity to review and provide feedback on the adverse effects of the proposed expansion to historic structures.

Coupeville, the second oldest town in Washington State, has a long record of preserving its historical and rural character. Many of our constituents choose to reside here because they value these qualities. The Port owns two heritage properties–the 1905 Coupeville Wharf and 1904 Greenbank Farm. Both are regional landmarks that generate significant direct and indirect income to Island County.

The Port is particularly concerned about adverse effects to the Coupeville Wharf. The Wharf is one of few local structures that symbolizes Whidbey’s maritime past. With unobstructed views of Penn Cove, marine life and the Cascade skyline, it retains many original features and provides unique educational value to the public. Substantially-increased incidence of low-flying jets near and over the Wharf will have a number of adverse effects including:

According to the National Historic Preservation Act, historic preservation is an important policy of the United States. It directs the federal government, including the Navy, to actively promote the preservation of historic resources through partnership with state and local governments. We urgently request the Navy to fully consider these adverse effects not only to the Wharf, but to all historic structures within Ebey’s Landing National Historical Reserve; and to take steps to minimize and mitigate the effects including the following:

The Port is a strong supporter of our nation’s Armed Forces, especially the Navy and its operation on Whidbey Island. We recognize the vital contributions of service members to our Island County economy, work force, schools and community organizations and we are grateful for their service to our country. We are also grateful for the opportunity to share our views and comments on matters of vital importance to the present and future welfare of our Port district constituents.

John S. Mishasek, President, Board of Commissioners, Port of Coupeville